Apple’s iOS 14 Update: What It Means for You and Your Ads 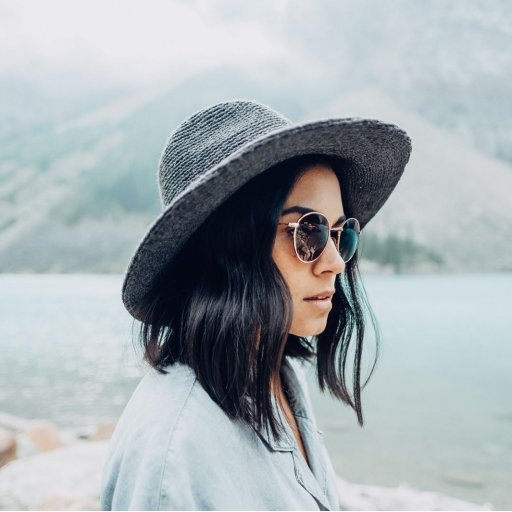 Apple: In our next iOS 14 update, we will be rolling out a new privacy initiative that requires permission from users to track their movement and behavior across applications and websites.

Perhaps you’re here because you’re wondering what the fuss is all about. Or, you’re feeling a lot like Spongebob. (“I’m fine, everything’s fine.”) Either way, we’re here to answer your burning questions about the latest Apple iOS 14 privacy policy update, how it’ll affect your advertising, and the next steps for pivoting your strategy. In this blog, we will answer all of your need-to-know questions like:

What does the new Apple iOS 14 update entail?

Let’s start with the basics. Last year, Apple announced that it would roll out new privacy policy regulations alongside their latest iOS 14 update in early 2021. This update gives users the choice to block the IDFA (Identifier for Advertisers) at the app level. What’s the IDFA? It’s a unique identifier for mobile devices used to target and measure advertising effectiveness on a user-level across mobile devices.

Do you have an app and intend to collect user data (and share it with third-party platforms such as Facebook)? If so, you’ll be required to use the AppTrackingTransparency (ATT) framework, which entails seeking users’ permission to track their behavior and movement. The Apple modal will include a short message (as seen below) and two simple buttons: “Allow Tracking” or “Ask App Not to Track.” 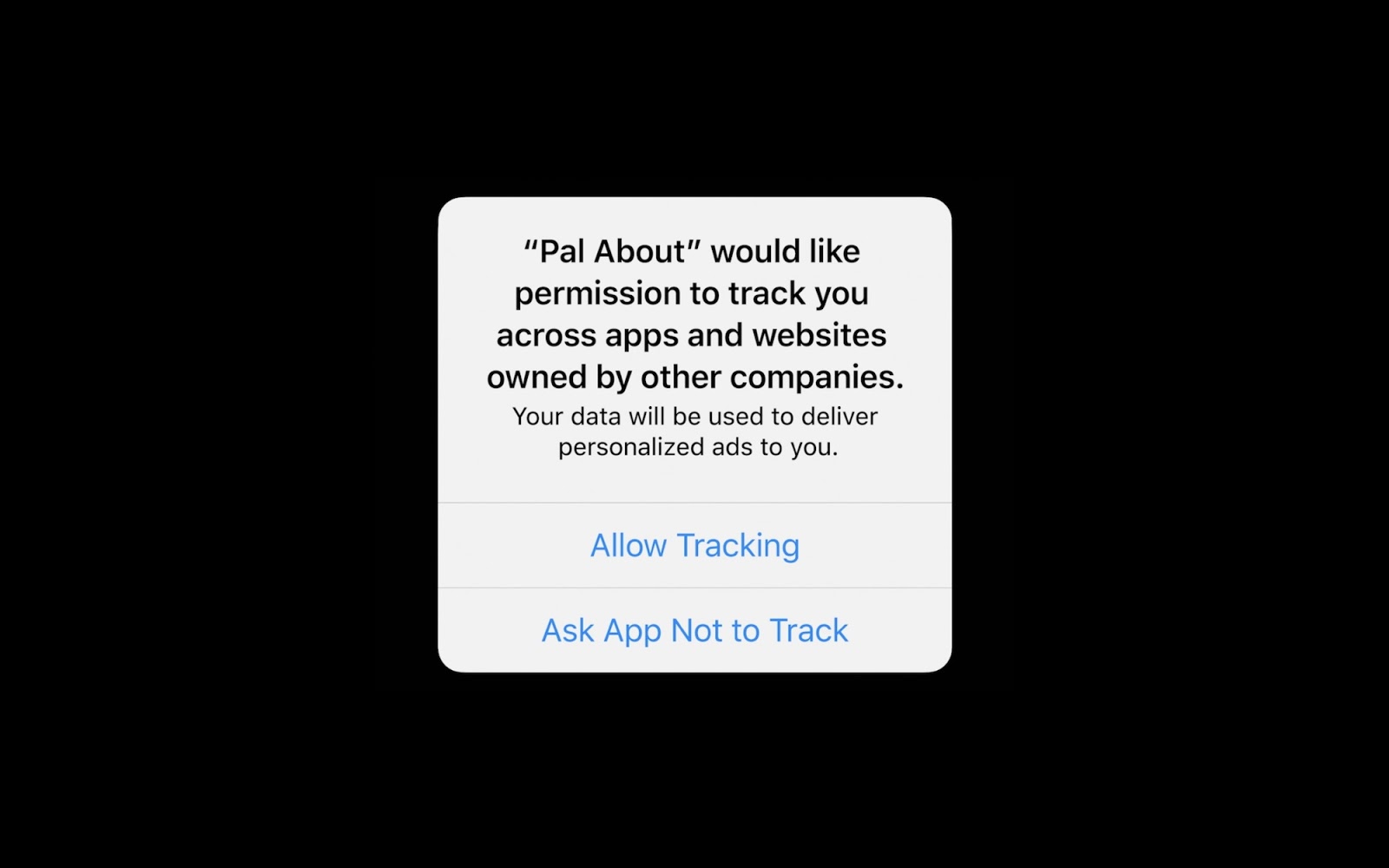 You can imagine that many users, given the option, will opt out. Like, nobody needs to know that I spent this past Valentine’s Day alone binge ordering clothes and Taco Bell. And then to take this information and send targeted Ben and Jerry’s ads to me? That’s like knocking someone when they’re down.

How does the iOS 14 update affect ad platforms and publishers?

The latest iOS update affects advertising at all levels, starting with ad platforms and publishers—particularly Facebook Ads, known for its unparalleled insights on its users. These publishers depend on detailed user data to send hyper-targeted ads. But as more and more people opt out of ad tracking, these platforms will have less information to work with.

In other words, ad personalization and performance reporting will be limited for both app and web conversion events.

If advertisers aren’t gaining conversions from their paid media efforts, they’ll stop paying for the service. In other words, the iOS 14 update has the potential of severely impacting ad platforms’ and publishers’ revenue—and they’re not happy about it.

How does the iOS 14 update affect advertisers (like me)?

The iOS 14 update will affect businesses and advertisers, like yourself, in several ways.

First, it’ll impact your strategy. Right now, with highly detailed performance reporting, you can see which ads are attracting clicks and which ones aren’t. You can put your attention towards refining the campaigns that work instead of guessing.

But after the iOS 14 update, you may only see a fraction of your user data. Consequently, it may skew your understanding of your target audience. For example, your data report may suggest that your user base consists mainly of men in their 20s—but perhaps this is just the only demographic that’s opting in. Your user base could also include many older men—and there could be a huge opportunity to include dad jokes in your ad copy—and you’d never know. 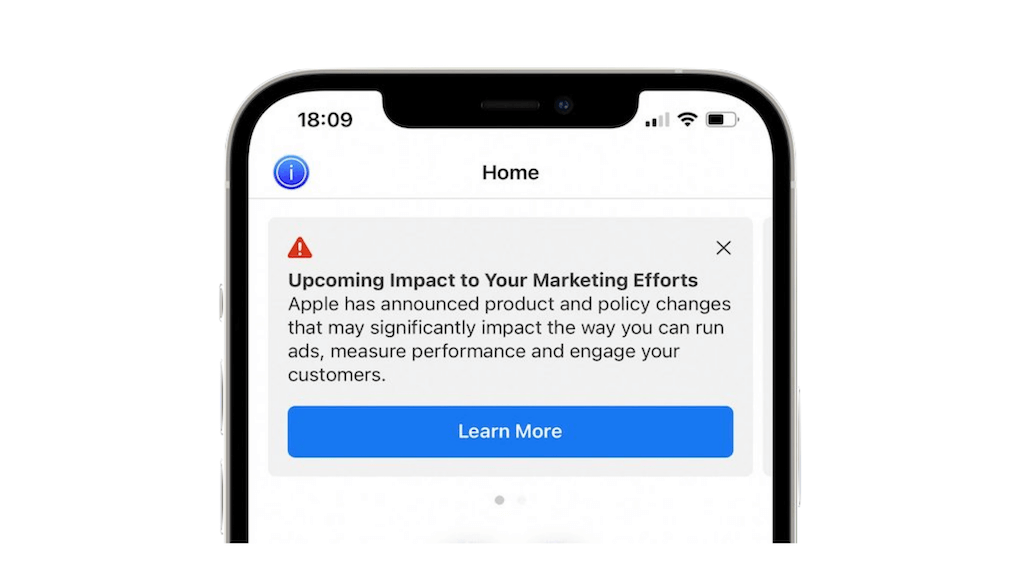 Obviously, this will also impact ad publishers’ targeting and retargeting capabilities. If all the dads of the world are opting out of ad tracking, they won’t know to push your ads to dads—and if you sell barbeques, tools, or fishing rods, that’s a whole lot of conversions you could be missing out on through paid media. Our two cents? Focus on making good first impressions. Create standout content that’ll get users to convert on the first go.

Unfortunately, having limited user data will affect your attribution reports and understanding of ROAS (return on ad spend). With Facebook’s new default attribution window transitioning from 28 days to 7, you can only see conversions committed within 7 days of the click.

How does the iOS 14 update affect users?

Now, what about the people?! How does the iOS 14 update impact the user experience? Users will still see ads, but they will be less personalized (and potentially irrelevant).

Apple has taken the stance that control over one’s data is vital for a positive user experience. Meanwhile, ad platforms like Facebook Ads maintain that blocking the IDFA will impact the personalized experience that users now not only crave—they expect. In a 2019 survey, 72% of consumers say they only engage with marketing messages relevant to them.

At this point, we can’t tell you which direction users will go. Will they prioritize their privacy? Or will they prioritize a personalized experience? How will this vary between demographics? There are still many questions to explore down the road. For now, here are some proactive steps you can take to reduce the impact of the iOS 14 update on your business.

How can I prepare for the iOS 14 update?

What’s an SDK? SDK stands for “software development kit,” or devkit for short. It’s a set of software tools and programs used by developers to create applications for specific platforms.

Let’s say you’re creating an Android app that uploads photos to Facebook. Rather than start the code from scratch, your developer will borrow code from the Facebook Android SDK. SDKs support interoperability and integration while lightening the workload. They’re developers’ BFFs.

If you’re working with Facebook Ads or Google Ads, updating their SDKs is a great place to start.

At this time, these versions support conversion tracking using Apple’s SKAdNetwork API, which allows you to attribute an app install even when the IDFA is not available.

Here’s something to consider: If a user commits more than one of the 8 conversion events, Facebook will only be able to track the event that you’ve ranked the highest priority. So make sure to rank these events with that in mind.

What can I do to pivot my advertising strategy?

You can imagine that advertisers are looking for creative ways to work around the ATT framework and increase user opt-ins. One such method is triggering your own pre-permission message to provide context to Apple’s modal. BUT, like all “quasi-loopholes,” you need to be careful with how you’re crafting your message.

Do: Explain the benefits users gain from opting in, describe what you’re asking from them, address privacy concerns, and prime them to take action.

Take the example below. This fictional gaming app explains why ad tracking is essential to the app’s survival and how it affects the users (a personalized ad experience and free use of their app). With the button “Next,” it primes the user for Apple’s modal and the action that will be required. 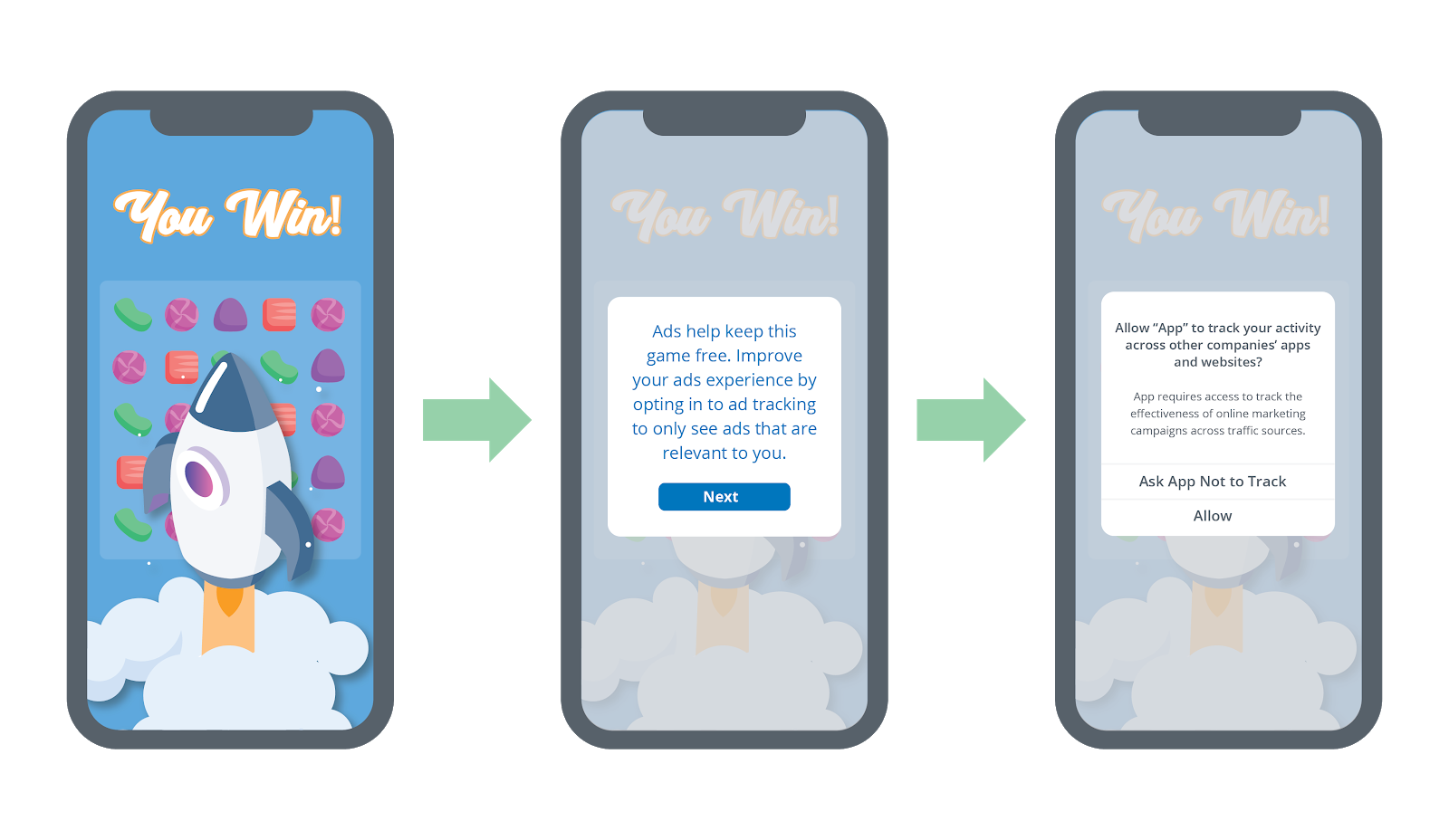 Don’t: Have users opt into ad tracking within your own prompt. Apple will be cracking down on messaging that asks users to opt in outside of the ATT modal.

For example, you wouldn’t be allowed to show the prompt below because you’re asking for permission via your framework. A good rule of thumb is refraining from using words such as “allow” in your button. Buttons using words like “proceed” or “next” suggest that you’ve provided context, but the actual act of opting in will follow. 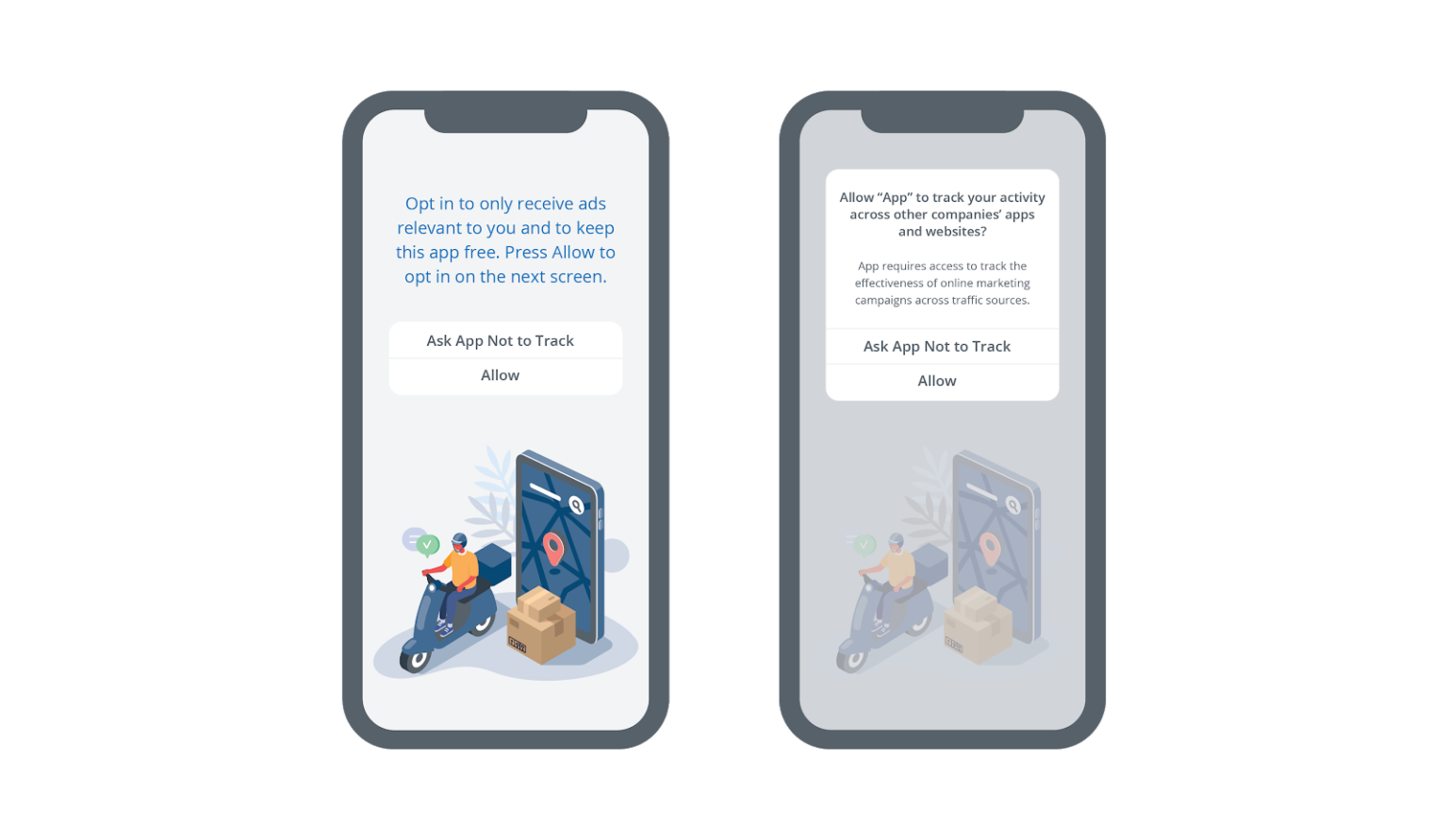 Remember, it’s not you vs. the world

We just talked about a lot of scary stuff today. But let us remind you that there are many in your corner fighting for a solution (including social media and ad publisher giant Facebook). We, too, believe that personalized ads and user privacy can coexist. So let’s chat about how we can help pivot your strategy, optimize your ads, and take your results up and to the right!